In the fairy maid's room in Naraku basement, four fairy maids are gathering.

Basically, one room is for four people, and each room has its own work rotation.

Today is their day off.

The fairy maids' level is 500, which is almost the weakest level in this "Naraku." Still, it is much higher than ordinary adventurers on the surface world.

Therefore, they are hardly ever feeling tired. They really want to work hard for Raito's sake, the infinite gacha cards summoner.

However, regular off days are a must, and disobeying the Lord's orders goes against their life purpose.

That's why they're sitting around the table chatting in the middle of the day.

The table was lined with N-card foods from "Infinite Gacha". They had set up a system where even the girls could buy the low-rarity N-card foods in the store.

Of course, the topic of conversation is about Raito, their Lord, their life purpose, their God.

"I heard that Master will be returning to the abyss tomorrow."

"Unlike in Naraku, we can use "Transfer" card in the surface world, regardless we're outside or inside the dungeon. If from the beginning the "Transfer" card could be used inside "Naraku", the Lord wouldn't have so much trouble." [Glasses]

The serious-looking fairy maid with glasses unconsciously pushed up her glasses frame and let out a sigh.

The gal fairy maid sitting next to her agreed and nodded repeatedly.

"I get it, I get it. I've heard that dungeons have different characteristics, but 'Naraku' has the worst characteristics of them all! That's the world's largest, hardest, and most punitive dungeon, 'Naraku'. Raito-sama, who conquered it, is really a God~." [Gal]

The last one, she also has a beautiful face, but her bangs are long, and her vibe is somewhat dark. But on the contrary, she had an aura that made the weak and timid boys like her.

"I'm jealous of Nemumu-sama, who is always with my Lord like that. I'm too jealous. I'm so jealous I want to punch the wall with my fist." [Nerdy]

"I get it, I get it. I know that feeling very well. If I could, I'd like to take Nemumu-sama's place and support Raito-sama's side." [Gal]

"Ugh, why is my level only 500? If I had higher levels, I could join my master as an adventurer on the surface world, and even become my master's shield in a time of crisis……." [Ordinary]

The most ordinary fairy maid held her head and lay down her face on the table.

Therefore, no one bothered to correct her, but instead, they all agreed that they could become a shield for their master in a time of crisis.

Basically, those summoned from gacha cards like these girls cannot increase their level no matter how many monsters they kill.

If they have magic items, they can raise their strength even with a fixed level. …… However, even if fairy maids like them increase their strength, it is still very difficult to replace Nemumu, the level 5000.

"Now, now, now my Lord and the others are in the snowy mountains. They are searching for the magic stone of a monster called Yeti, and it seems that they have defeated it. Snowy mountains, two people who're freezing, hugging each other with their skin to warm each other, a man and a woman. There was no way nothing would happen… Isn't that the best?"

The dream of the maid who pushed up her glasses frame is shattered in an instant.

"I can't take this anymore! Maybe I can hug my master! Just thinking about it makes me…!" [Ordinary]

Imagining herself being hugged by Raito, the fairy maid, who laid her face on the table, now hugging herself, her body shaking with excitement and pleasure.

Ignoring her, the other girls also speak their minds.

"Of course, if it can come true, I want to hug and warm each other with my Lord!" [Glasses]

"Ah, on the contrary, I want to hug Raito-sama from behind. Holding and warming up Raito-sama's body and soul. Isn't that the best?" [Gal]

"I, I, I want my Lord to strip off my maid clothes, and the two of us stranded in the snowy mountains." [Nerdy]

The other three people put together a tsukkomi in response to her statement.

However, the nerdy fairy maid continues without paying any attention to them.

"But, but, but for my Lord to forcibly take off this maid clothes and stranded together in the snowy mountains, that's a reward, right?" [Nerdy]

"I understand, but your level is too high!" [Ordinary]

After everyone had agreed and their tsukkomi ended, the most ordinary fairy maid let slip a few words.

"Aaaah… I can't wait for Master to come back to the "abyss"… I know it's not possible to hug him, but I'd like to see him, at least for a moment. I haven't seen him for days…." [Ordinary]

"Indeed, I can't hug him, but I'd like to feel his presence, even if it's just a glance or even a single word from him." [Glasses]

"I understand. I want to smell Raito-sama's scent." [Gal]

Even though they didn't know what this military agreement is, the other three nodded their heads in deep agreement.

"I wish that all of Raito-sama's enemies on earth could be eliminated. And if Raito-sama rules the world, everyone will be happy, happy! I can't wait for such a world to come~."[Ordinary]

"Our Lord doesn't do so right away because he has a plan. A maid like us should not say anything. Our life purpose is to fulfill the Lord's wishes." [Glasses]

The glasses maid fairy pushed up her glasses frame and reminds her colleagues.

The other three nodded in agreement at this comment.

Gyaru (ギャル) is a Japanese transliteration of the English slang word 'gal' ("girl") used to define a fashion subculture in Japan. 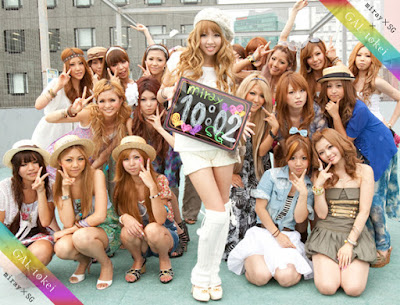 The act of pointing out that something is ridiculous / very silly.

Register For This Site.

Please enter your username or email address. You will receive a link to create a new password via email.